Did you know that the Teddy Bear got its name from a United States President? The origins of the Teddy Bear go back to a traditional story that took place in 1902 that involved President Theodore Roosevelt. The President was in the state of Mississippi trying to settle a border dispute between Mississippi and Louisiana. His hosts knew that the President was a devoted hunter, so they took him bear hunting. The only bear that they could find was a small bear that they tied to a tree. The President refused to shoot it, as he didn't see any sport in killing a helpless animal. 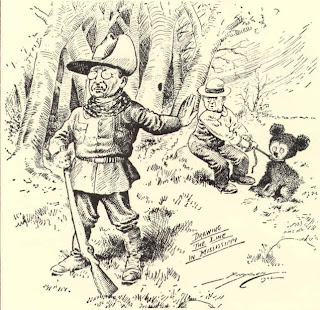 The story got out, and an editorial cartoonist for The Washington Post named Clifford Berryman drew a cartoon showing a cub bear tied to a tree, and Teddy Roosevelt refusing to shoot it. The cartoon carried the caption "Drawing The Line In Mississippi." The cartoon caused an immediate sensation and was reprinted many times.

The owners of a candy and stationary store in Brooklyn, New York named Morris and Rose Michtom were inspired by the President's act and made a stuffed toy bear to honor him. They fashioned the toy bear to look like the bear in the cartoon, and placed it in the window of their shop. Next to the bear was a copy of Berryman's cartoon and a sign saying TEDDY'S BEAR. The public created such a demand for the bear that the Michtoms joined up with a wholesale firm named Butler Brothers and started the Ideal Novelty & Toy Company, the first teddy bear factory in the United States.

Made from inexpensive materials to the most exotic fur, and from the size of a thimble on up to very large, it has been a perennial favorite of children and adults ever since.

Posted by Alan Beggerow at 8:00 PM