The Mirror - Reflections on Its Magic and History

The first mirrors of history were nature's own, reflecting the visage of the first humans on the smooth surface of water. People must have considered these images of themselves not only magical but quite attractive, for they lead to the first mirrors made by man. The first ones constructed were of polished metal; brass, bronze, silver and even gold. There were also ones made from the glass-like mineral obsidian. Highly polished metal mirrors are mentioned in The Old Testament of the Bible. Ancient Egyptians, Greeks and Romans used polished metal mirrors, most hand mirrors with a handle and some very ornately decorated.

After the discovery of glass making, mirrors were also made from a sheet of glass that had a polished metal backing. The first example of this kind of mirror, a small rectangular one made from glass with gold attached to the back and sealed with shellac, was found in Roman tombs of the 1st century A.D. The method of attaching a thin sheet of reflecting metal to glass was not perfected until the 16th century when widespread production of this kind began. Venice and Nuremburg were renown for glass mirror making, with some very ornate examples being made. 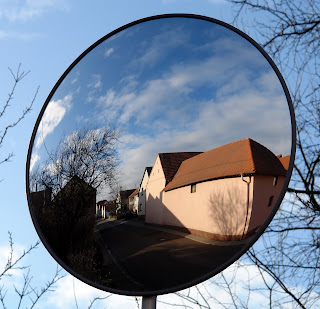 The art of glass mirror making spread, and in the later years of the 16th century London and Paris became famous for mirror manufacture. The mirrors of this time were extremely expensive, especially the larger ones. They were objects that only the wealthy could afford, and were very often highly decorated. Glass mirrors remained an item of the nobility and the rich for many years due to their expense. In its day, the Hall of Mirrors of the Castle of Versailles in Paris, France was not only known for its beauty but for the tremendous expense of the 357 mirrors that are in it.

In the late 17th century, around the same time the Hall of Mirrors was built, mirrors started to be used for more than looking glasses. Highly ornate ones had frames of tortoiseshell, mother of pearl, wood veneers, silver or gold. The tradition of hanging a mirror with a decorative frame over the mantelpiece of a fireplace was begun at this time. The frames of these items would be changed to reflect current tastes and styles of the times, as it was cheaper to change the frame than to purchase a new mirror.

When the chemical process of coating a piece of glass with reflective metals began in the early 19th century, mirrors became less expensive and more widespread. Every household had at least a hand mirror, if not one or two hanging on a wall. They became more of a décor item, as they were used in decorative schemes for the home and public places.

But a mirror is far from being only an item used for gazing at oneself or for home décor. Think of the many ways they have been and are still being used. In the largest conventional telescope, the reflecting telescope. The invention of the periscope would not have been possible without mirrors. The mirror is still a reliable and inexpensive item of safety for automobiles. Dentists make full use of mirrors in their practices. And the list goes on. With a history long and rich, uses numerous and varied, the common mirror still has the magic that attracted early humans.

Posted by Alan Beggerow at 2:30 PM