The invention of the wire clothes hanger has been attributed to Albert Parkhouse, an employee of Timberlake Wire And Novelty Company in 1903. This company fashioned wire lamp shade frames and other items from wire. One story goes that Parkhouse came to work one day, went to hang his coat up and found all of the coat hooks were in use. Out of frustration, Parkhouse grabbed a piece of wire, bent it into the shape of what we recognize as a clothes hanger on the spot. Another story says that Parkhouse was inspired by complaints from other employees of not enough coat hooks. 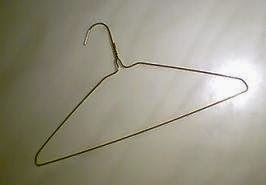 A patent for a clothes hanging device made from wire granted to John B. Timberlake, the owner of the company Parkhouse worked for, in 1904. It was common for the company to patent an employee's invention at that time. While it is not absolutely certain the Parkhouse was the inventor, it is for sure that the company and not the inventor profited from it. The wire clothes hanger became the preferred method of displaying clothing in shops when a men's clothing store in Grand Rapids Michigan was the first to display clothing on them in 1906.

But the idea for a clothes hanger did not start with Parkhouse or the Timberlake company. Some believe that Thomas Jefferson, the inveterate inventor of so many items also invented the first wooden clothes hanger. But all through the 18th and the first half of the 19th centuries clothing was usually hung on hooks or laid flat for storage. Hangers of various types and configurations began to be used in the middle of the 19th century. The prototype for the simple wire coat hanger began with a clothes hook that was patented in 1869 by O.A. North of Connecticut.

The basic wire coat hanger has changed very little from the original. There are also hangers made from wood, padded hangers, hangers with clips on the bottom to attach skirts or slacks. But the simple wire clothes hanger is not always used for hanging clothes. Because the type of wire used for them is relatively soft, it is easily bent, shaped and cut, wire clothes hangers have been a handy source of wire used by do-it-yourselfers, for children's arts and crafts, for lock picks and many other uses. The trend away from wire to plastic clothes hangers may be an inevitable step in the evolution of clothing storage, but what will multi-taskers do that use wire ones for more than hanging clothes on?
Posted by Alan Beggerow at 2:53 AM