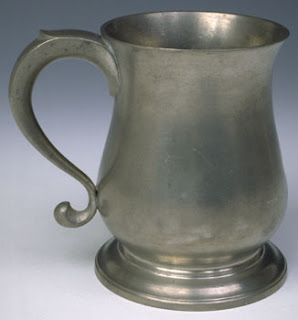 At the dawn of civilization, man discovered that characteristics of familiar base metals could be changed by combining them. In correct proportions, the metals compliment each other and form an alloy. Along with bronze, pewter was one of the first alloys known to humans. The earliest piece of pewter found is from an Egyptian tomb from 1450 BC.

Pewter is an alloy of primarily tin and copper, with other metals such as antimony, bismuth and lead. Pewter was known in ancient China, Egypt, Greece and Rome. The oldest known pewter item has been dated to 1500 B.C.E. and was found in Egypt. In ancient times it was an alloy of 70% tin and 30% lead, and this high concentration of lead caused lead poisoning when the alloy was used to make eating and drinking utensils. The lead would leach out, especially if acidic food or drink came in contact with the alloy. Modern pewter alloys no longer use lead in them due to lead poisoning dangers, and consist of tin, copper, bismuth or antimony. Pewter is a shiny metal, and has been called 'poor man's silver'. As it is highly malleable with a relatively low melting point (approximately 460 degrees F) it has been used for many items. Plates, drinking mugs, steins, flatware, candlesticks, and for jewelry. Due to the softness of the metal, pewter is not suitable for making tools.

The use of pewter had its roots in Europe about the 11th century. Pewter crafting in England grew especially skilled in the Middle Ages, and the metal's popularity continued until the late 19th century. Pewter craftsmen in the Middle Ages developed many different grades of pewter, of which three were:
Fine Grade had between 95 and 99 percent tin and 5 to 1 percent copper. This grade of pewter was very shiny, and was used to make eating and drinking utensils for nobility and the upper classes. Trifle Grade was usually 92 percent tin, 1 to 6 percent copper and up to 4 percent lead. It was also used to make eating and drinking utensils, but was not as shiny.

Lay Grade could contain up to 15 percent lead and was not used for eating or drinking utensils. It was used for candlesticks, basins, and other items. There are relatively few existing examples of early pewter ware because the metal was so easy to melt down into new items.

There has been a modern resurgence in the use of pewter. By casting, spinning on a lathe, pounding into shape and other means, pewter is used for a variety of items. The relative softness and low melting point of the metal lends it well to highly detailed figurines. Drinking steins are still being made that use pewter for the decorative lids, and jewelry of all types are cast from it. Given time, pewter will eventually oxidize and develop a satiny gray patina that can either be polished off or left on. 'Poor Man's Silver' remains a very useful and attractive alloy over 4,500 years since it was first discovered.

Email ThisBlogThis!Share to TwitterShare to FacebookShare to Pinterest
Labels: pewter